It was a foggy Tuesday morning (Monday was Labour Day). Ezra was both nervous and excited, with a backpack on his back and a lunch bag in his hand. When he entered school there was no hesitation, no anxiety. As he released my hand I wished him a fun day and he smiled back uncertainly, then he turned and walked into school without looking back. 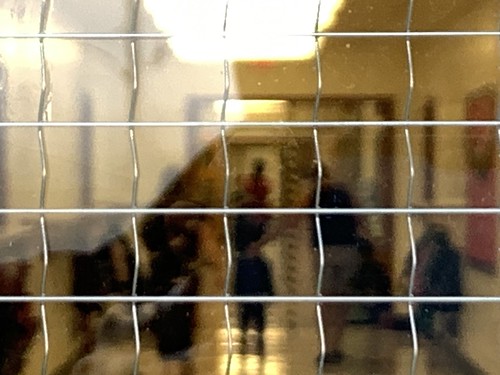 I could say this photo is artfully blurred to reflect my feelings as I watch my son take his first steps into school, beginning his journey away from home and towards eventually finding his independent self in the world at large; but really my phone camera just kept focusing on the door window mesh. There’s a clearer image here but I like how the candid, hasty one above came out.

At the end of the day he came out looking almost shell-shocked, quiet and unresponsive after emerging from school. I thought at first he’d been traumatized by his first day, but after several minutes of coaxing he said in a small voice “I didn’t want to leave yet…”

Pre-K has continued to be fun for him every day since.