My gateway to iOS was a second-generation iPod Touch gifted to me by Mom for Christmas in 2009. For a while that served as my music player and secondary mobile device alongside the Nokia 5800 and later the HTC Magic, but more and more I found myself just wifi-tethering the iPod Touch to the phones to use for handheld computing, to the point that I decided to dispense with the unwieldiness of a double-device lifestyle and just get an iPhone. 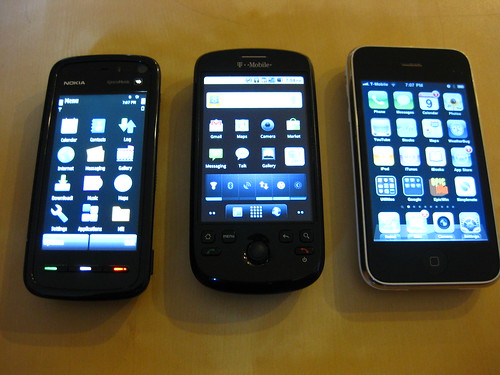 There were tradeoffs with switching, however: (1) US iPhones are locked to AT&T, so unlocking requires either a warranty-voiding jailbreak, or purchasing an expensive factory-unlocked phone imported from some other country with mandated GSM unlocking; and (2) I’m on T-Mobile, which runs on an oddball 1700/2100Mhz 3G band, so even unlocked, an iPhone set for AT&T’s 850/1900MHz 3G band would be limited to slower EDGE data connectivity. I weighed these disadvantages and took the leap anyway, purchasing the cheapest gray-market jailbroken unlocked unit I could find on Craigslist: an 8GB iPhone 3G.

This was a second-generation iPhone, noticeably slower than the iPod Touch it was replacing, and lacking multitasking and native video recording functionality. (I tested several third-party video apps, all of which required a lengthy compression delay after recording, made worse by the inability to switch apps.) Nonetheless, it was an iPhone; even with these drawbacks, I felt like I had come home, user-interface-wise. 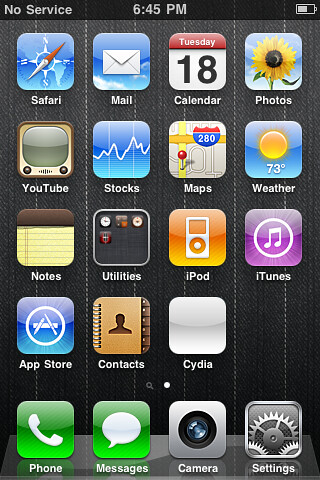 I would have explored further opportunities in multitasking and video capture with Cydia, had I not lost the iPhone 3G one week later, when it slipped — or got picked — out of my pocket on a crowded NJTransit train at New York Penn Station. Undeterred, I returned to my previous gray-market source and splurged further to get the next-cheapest unlocked unit he had in stock: a 32 GB iPhone 3GS. (Yes, it was an expensive and painful indulgence, and in retrospect I should have just purchased a locked secondhand contract AT&T unit for cheap and unlocked it myself.)

There was a marked performance improvement between 3G and 3GS models, more so when I upgraded the jailbroken firmware from iOS 4.0.1 to 4.3.1. Video capture was also built in to the camera app, with much less compression lag, and app switching with a double press of the home button was finally possible.

Here’s an example video of a Georgetown waterfront flood in DC, with clips taken on the 3GS camera and edited together in Splice:

It still beggars belief that Apple took so long to bring basic functions like multitasking, copy/paste, video capture, and contact search to iOS, or that older devices are still excluded from some of these features, necessitating either an expensive upgrade or a jailbreak. The lack of a simple Finder-like filesystem manager, and the native browser’s inability to save webpages or upload images, still chafe at me on occasion, though the Dropbox and Instapaper apps have alleviated some of that annoyance. One could argue that Apple has weighed against some of these features in favor of simplicity, security, and performance, but there’s also the cynical aspect of making customers spend money for newer iPhones, and, in tandem with iTunes integration and a closed and proprietary developer environment, locking them into the Apple software ecosystem.

For now, the iPhone 3GS more than suffices for my needs as a user. While the closed system has drawbacks, the tight hardware-OS integration and much-vaunted ways of Apple interface design result in a mobile user experience that excels any other phone I’ve had thus far in ease, speed, and flow — with a few exceptions. (I’m looking at you, iCal and Contacts apps.)

I have named the iPhone “Aethrine” (word picked out of an Old Englih dictionary) and wrapped it in an Otterbox Defender case to keep it safe from falls and moisture, with an AwesomeFace taped inside the little rear logo window, just for lulz: (By the way, if you happen to find an old iPhone 3G 8GB lying around an NJ Transit train, please let me know.)