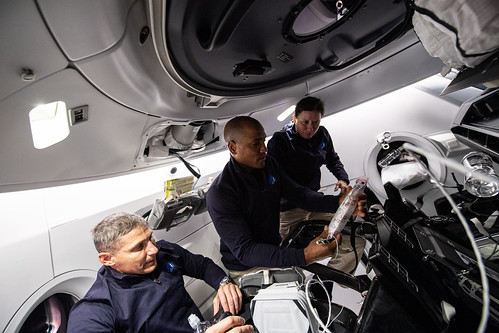 NASA astronauts aboard SpaceX’s Crew Dragon captured the flag left by the last space shuttle crew on the ISS, finally filling the gap in US human spaceflight. Three missions in, I got interested in tours of the spacecraft by the NASA crews who have flown so far:

For comparison, an older tour of Space Shuttle Endeavour (STS-134). Definitely different interiors; Crew Dragon is much more airliner-like, with more off-white moulded plastic and much less of the mess of instruments and stowage lining the Shuttle’s cabin walls.

Related: inflight cabin views aboard Boeing Starliner, from the abortive demo mission which was unable to reach Station due to software issues. And from 2010: a much older SpaceX Crew Dragon concept animation.