Two views over the same point along the USA/Canada border from Calais, Maine and Saint Stephen, New Brunswick: a border crossing I made twice as I brought our cars from Virginia to Nova Scotia. 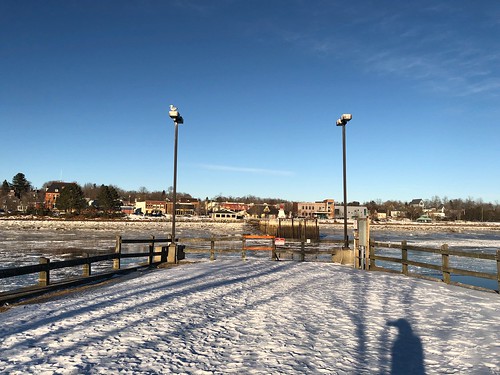 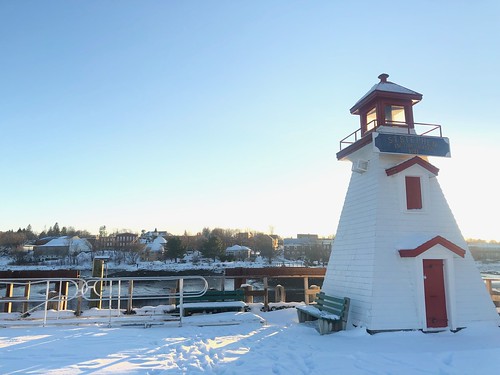 First drive: Amy’s Ford Fiesta, the week before Christmas. The day I was supposed to leave, the battery died, taking an already faulty transmission controller with it. Took an extra day to get the battery replaced at the service centre, which meant emptying the car of moving items beforehand and then repacking it afterward. (This was okay; strategizing the repack allowed me to cram way more leftover house stuff into the car.) 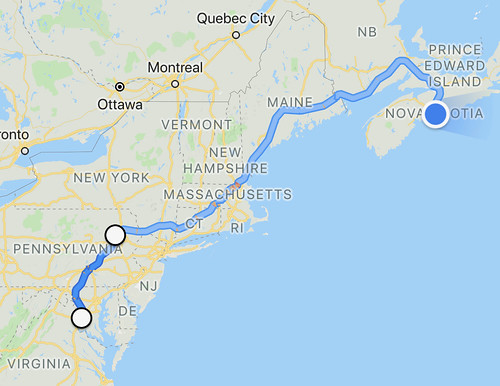 Finally got to leave VA at 10PM, detour up I-81 and I-84 through Pennsylvania to avoid late night road work on I-95 and generally skip NJ/NYC unpleasantness. Drove all night and all day while chugging canned coffee, surrounded by trucks for much of the route, was amazed at the rows and rows of trucks stopped for driver sleep breaks at every rest area and adjacent shoulders. Finally stopped in Bangor, Maine to rest at a hotel when my eyes could no longer stay open on the road.

Fun bit of serendipity in Bangor: after napping till about 11PM I took a taxi down to the local Irish pub, Paddy Murphy’s to get some food, but the kitchen had closed, so I just ordered the most filling dark stout on draft. While nursing a pint of Gunner’s Daughter, I struck up a conversation with the guy beside me, who turned out to be Sean Faircloth, author and former Bangor mayor and Maine state legislator. Not only did that make for an hour of fun politics conversation, but he knew a place across the street where they still had food for another hour — and a pint of some Narragansett IPA. 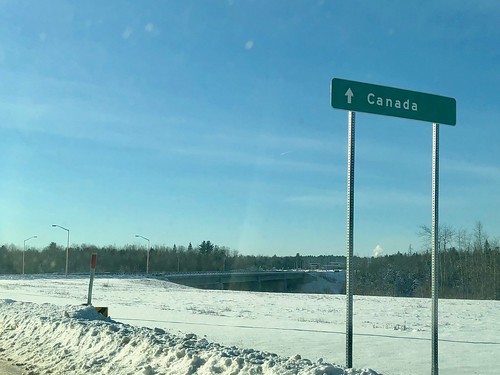 Next day, drove an hour and a half to the border, crossing over at the new border crossing to officially export the vehicle from the US and import it into Canada. (This involved tons of paperwork and stopping at both border offices, plus contacting and paying a broker a week beforehand to facilitate the export and provide 72 hour notice to the US CBP facility.) I was glad to have picked Calais to cross rather than the I-95 facility in Houlton — there was no line, and the whole process was done fairly quickly on both ends. I celebrated in Saint Stephen, NB with a Five Kings salad and a contemplative sunset walk along the snowy waterfront facing the border.

From St Stephen it was about six more hours to Halifax, mostly uneventful, no need to stop in St John, Moncton, or Truro. (I did try stopping for a pee break at the Nova Scotia Welcome Centre after crossing the provincial border that evening, but it closes at 4:30PM so I ended up at shopping mall in Amherst, NS.)

Second drive, Fiat 500, mid-January. I went a bit slower this trip, taking time to see some sights and visit friends and family. 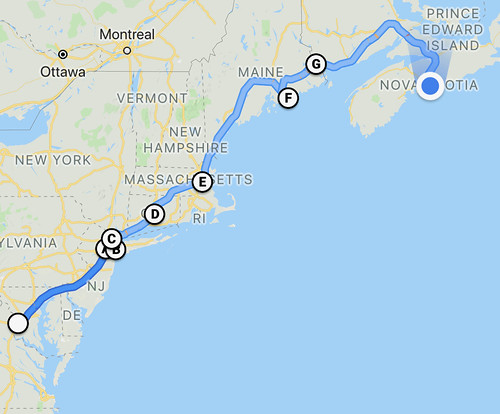 Left VA at 6PM and had my fastest trip up I-95 to NJ ever, dropped in on the in-laws in Union, then headed to Brooklyn to meet up with tmkf. Also did that NYC thing were you get food at 3AM, in my case a spicy halal platter from the grill at the back of Union Deli Grocery. 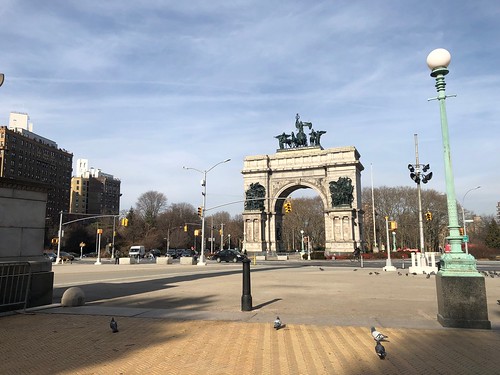 Walked around Brooklyn a bit the next day and ate at Dinosaur BBQ before heading out to drive across Manhattan and up into North NJ to visit stynxno, then striking out across Connecticut to have dinner with vee and duckstab before turning in for the night in Boston.

Next morning I dropped in on my cousin Kara, and had oysters with helicomatic at Union Oyster House, then hung around the Boston waterfront for a bit before getting back on the road and heading north to Maine. 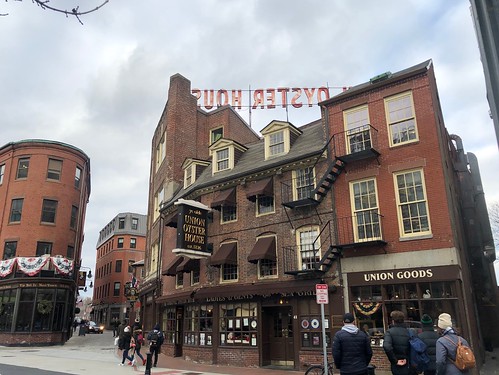 Stopped back at Paddy Murphy’s in Bangor again to have a bread bowl of Guinness Stew and another pint of Gunner’s Daughter. 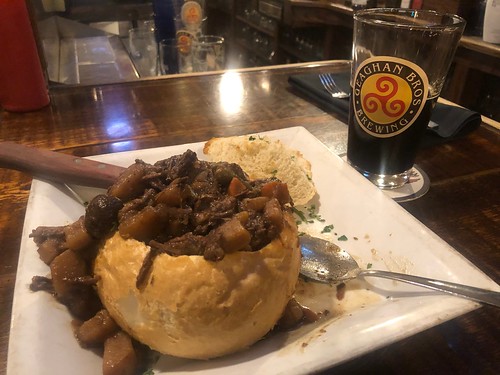 Stood on the waterfront for a bit to stare at the frozen Penobscot river before driving back out on narrow mountain roads towards the coast to spend the night at Quimby House Inn in Bar Harbor. 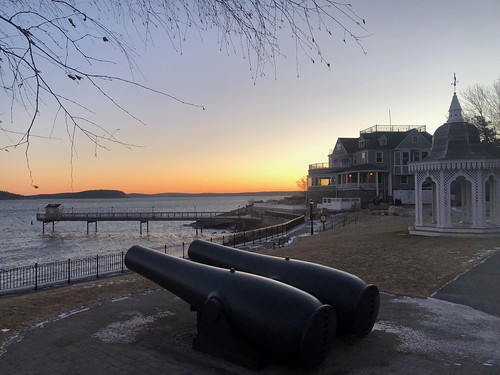 Next morning I wanted to try the famous Lobster Ice Cream at Ben and Bill’s but they were closed for the season. I did get to walk the Shore Path and see an Atlantic sunrise from the icy, tree-lined waterfront, and that made the whole detour worth it. Also got to chat Star Trek with the owners at Trailhead Cafe, which made for a very fun breakfast. 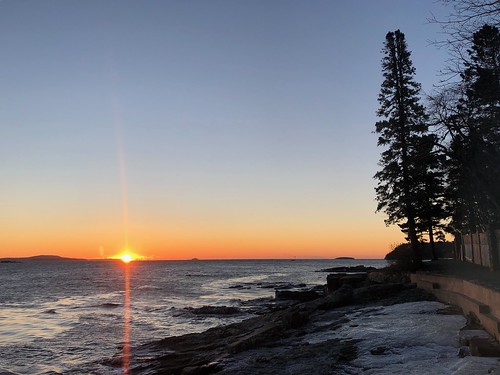 I wish I had stopped at a scenic outlook shortly after leaving Bar Harbor; Cadillac Mountain glistened with ice in the late morning sun in a view from the mainland I’d probably never see again, but I didn’t stop for a photo. Two hours later I had reached Calais, ME once more. 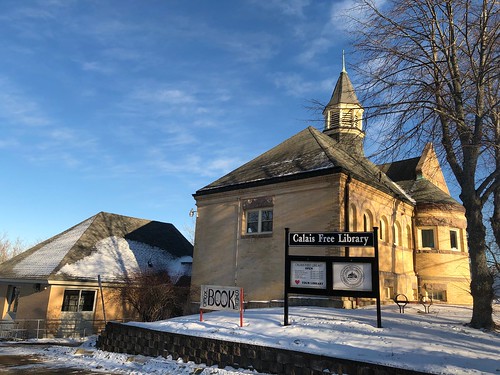 Parked by the Calais Free Library for a bit to gaze over the St Croix River before crossing the border once again, repeating the paperwork rigmarole on both US and Canada sides. 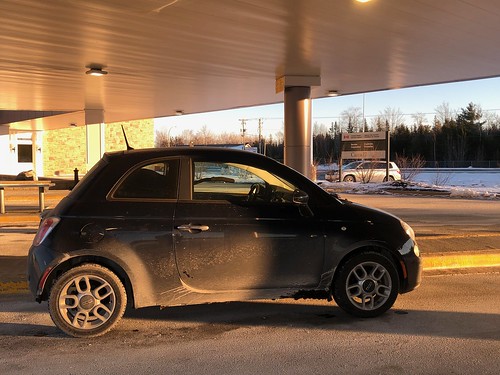 Six hours of driving through New Brunswick and Nova Scotia to Halifax, with just a brief stop at an Ultramar to get coffee and cash for the Cobequid Pass toll. Got to experience the exhilarating panic of a minor skid on the ice while getting back on the highway but otherwise the trip was uneventful, and I got to Halifax around 10PM.

There’s still stuff to do: the cars need to be modified and inspected within 45 days of entry to meet Canadian import requirements, and registered with Nova Scotia RMV. For now it’s good to have two very long solo road trips out of the way. 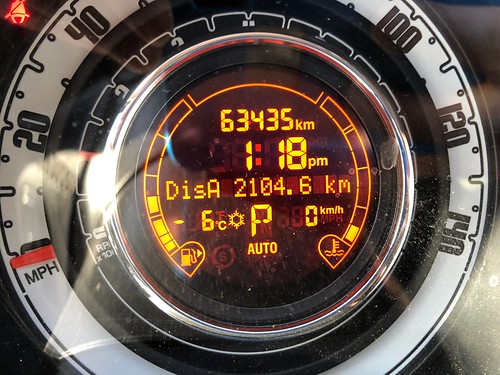