Effective immediately the appellation “Project Wallaby” is retired as the project pushes to live status. Say hello and welcome to our newborn son, Ezra K. Ordoveza! Ezra was born at noon on June 9th, 2016, after twenty-five hours of labor. At birth Ezra weighed 7 lbs 7.5 oz and measured 21.5 inches in length. 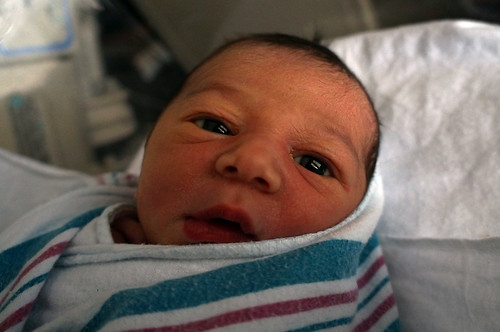 It’s all true, what they say: everything changes. I got to cut the cord, and later delighted in meeting his wide, alert eyes as he was poked and prodded in the pediatric warmer. Deep in my being I felt that ancient rush of wonder and love for this tiny being that my wife and I had brought into the world, the sudden and forceful conviction seizing our hearts that we promised with our souls to make our new son grow up safe and happy. Later still I felt swelling pride for my wife at her partnership in tireless work through sleepless nights of crying and feeding and diaper changes. All of it really makes for a new and adventurous chapter in our lives, and I cannot but pause every now and then to think to myself, “Wow, we are doing the baby thing.”

It’s only been a few days since our son was born and it’s already been all worth it, worth it to see him smile. (That’s before we realize that he can’t actually smile yet at this stage and that the face he’s making actually means he’s straining to poop in his diaper again.)

The floor is now open to your baby questions.

Why’d you take so long to post about it?

Well, it turns out newborn care is kind of time-consuming.

What’s with the name?

I really wanted our kid’s name to include his mother’s family name, so with long, hard-to-spell-and-pronounce middle and last names, I figured it would be good to give him a nice and simple first name — but one of spiritual significance in our faith tradition. We made a list, and the Old Testament scribe Ezra somehow came to the top. It’s a good, short name, easy to spell and pronounce, but just uncommon enough to be memorable without being over-strange. Also, the four letters in the name come right out of my last name. Another fun thing about this name is his initials: E.K.O. (Although since he was born I’ve taken to just calling him “Ez.”) 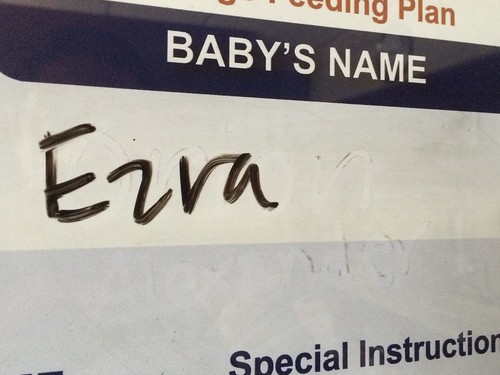 In that sense there might be some irony in us naming our biracial kid after Ezra, but a closer reading of the specific text in question shows that the issue is less about race than it is about sin. From my New Testament perspective, where marriage stands as an expression of the covenant between God and church, the priest Ezra’s strictures against intermarriage are understood as being about sanctity of spiritual life in God and Christ, not about keeping to outdated standards of racial purity. (Update: a friend clarified the Jewish perspective that the rules on intermarriage were for preserving the line of the Levitical priesthood from marriage with non-believers, not about avoidance of interracial marriage.)

What was Ezra’s 5 minute Apgar score?

Nine! He really is an exemplary baby.

How did the cats react?

There has been a lot of wary sniffing, and some really alarmed staring when the baby goes on a long crying jag, but after the initial shock the cats seem mostly indifferent, which is a relief. 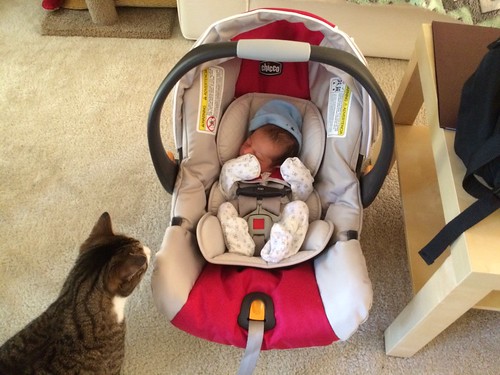 Did you do the Lion King thing?

No, good heavens, the way Rafiki was holding Simba just would not be a good way to hold a human baby; his head would flop all over the place. After we got home I did whisper to Ezra, “My son, everything the light touches is our kingdom,” but it was kinda late and the lights were still switched off. NAAAAANTS INGONYAAAAAMA

Can we see more baby pictures?

More photos of our son’s journey to life are in the “Baby Ezra” (formerly “Project Wallaby”) photoset. You may also enjoy this video of him riding in his mamaRoo.