Since we moved to a townhouse, we now live in a neighborhood with trick-or-treaters, making this my first Halloween where I’m the adult giving out candies rather than one of the costumed children gathering them. There was a momentous sense of unreality and aloof benevolence to my assuming this role, as I sat on the stoop in a Minecraft creeper box head with a Costco bag of fun size chocolates. 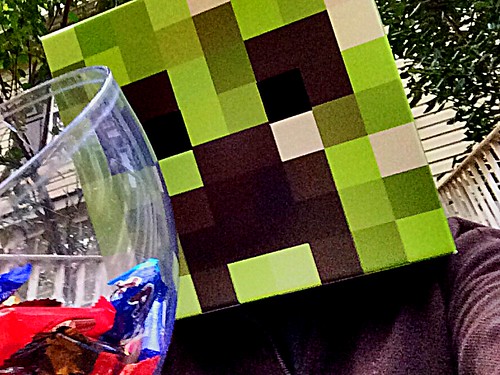 The mask was far too stuffy with no peripheral vision, however, so I opted instead to set it beside me on the step with a flashlight shining on it, kind of a green 8-bit jack-o-lantern. We got a total of 37 children between 5 and 8 PM, Star Wars costumes most popular. I grossly underestimated the number of kids, and paced my candy output badly, running out at 8PM and having to retreat into the house and shut off the lights in Halloween shame.