My Google Glass suffered some damage over Thanksgiving, snapping at a weak point in the frame despite my taking pains to keep it from stress and bending.

I thought that was the end for my Glass experience, but their excellent customer support quickly replaced the unit with an upgraded Glass XE-C. It was a marked improvement over the previous version: better battery life, more RAM, more responsive UI and less prone to overheating and crashing.

A week later, the Explorer Program ended. It was no big surprise: the product had been widely panned in reviews, and suffered well-deserved cultural stigma as an overhyped symbol of ostentatious tech consumption. Customer support continues to this day, however, and developers are encouraged to continue making apps for the platform. 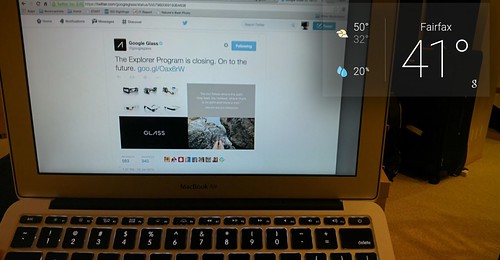 Nick Bilton’s NYT story “Why Google Glass Broke” covers a lot of the inside drama that made Glass the consumer mess that it was. The product wasn’t ready for primetime but was pushed to sale anyway, as an expensive limited public test to build PR hype. The tension over whether or not Glass was meant to be worn constantly was evident in the design of the unit — it was difficult to keep anywhere on one’s person other than worn on the head, but didn’t have the battery power or immersively augmented interface to match constant use. (I wonder if Sergey Brin’s affair with Glass marketing manager Amanda Rosenberg was related to the bombastic “supermodels and skydivers” marketing push.) Google[X] Labs director Astro Teller mentioned the problems with the Glass Explorer Program in a lengthy article about “moonshots”.

Twitter has stopped supporting Glass. Until recently Facebook had a Glassware Gallery entry that started throwing an error screen — but now it’s just gone from the list. Pretty much the only major social network that still works on Glass is Google Plus, and that might go away too. On the up side, YouTube, Star Chart, and Beer Compass are still working. IFTTT can fill some of the gap in lost apps with its Glass functionality, and Android users (not me) can still use Android Wear notifications.

I’ll try and take better care of this one.

(Also thanks to Kif Leswing for the GigaOm shoutout to my ongoing “drilthroughglass” project.)