(Buy an iPad mini just like mine on Amazon!)

While in Norfolk last month I dropped by MacArthur Center Apple Store to see the just-launched iPad mini. The store was bustling, and staff told me they had quickly sold out of all but the 64GB stock. I held a demo unit in my hand, and after a few minutes I knew I would drop a bunch of birthday money and walk out of there with a new 64 GB iPad mini. It was destiny. The iPad mini very quickly became my main handheld computing device. (The old iPad 2 is now with Amy.) I’d actually been wanting a 64GB iPad to hold more photos and 3D games (16GB had proven woefully inadequate to me on our last cruise) so this opportunity came at a good time.

Spec-wise the iPad mini is almost the same as the iPad 2: both have A5 processors and the same battery life and screen resolution. (iPad Comparison Table here.) The iPad mini is of course smaller, and improves over the iPad 2 experience with better cameras and Siri*.

(* Indeed, one wonders why Siri works in iPad mini and not on iPad 2 when both have the same chipset. The cynical reason would be that Apple is crippling older devices to drive people to spend money on newer ones, although a less paranoid explanation is that Siri requires hardware-based noise reduction to work properly — hardware that is on newer A5 devices.)

In most ways the interaction experience between devices is identical, and with a direct restore from backup I had few difficulties transitioning from iPad 2 to iPad mini. Form factor makes the device. The mini’s one-hand holdability makes it far more usable on the go than the full-size iPad, which now feels almost unreasonably huge and heavy in my hands. And though the mini’s screen is smaller, I’ve had no problems with text size or readability. The Apple Store sales rep mentioned something about display resolution vs. screen size resulting in the iPad mini having a higher overall pixel density than a full-size iPad — certainly not retina-level, but sharp enough to be legible to anyone with good vision. Thumb typing is easier on the iPad mini, but normal five finger-typing is also manageable in landscape mode. Four annoyances so far: (1) Lightning connector. The mini does come with its own lightning USB cable for charge and sync, but I hate that I have to spend at least $29 for an adapter to make the iPad mini compatible with older peripherals. (3) iOS 6 Maps. My street name is misspelled, places like the local pet store are misplaced, and the list goes on. I can run the new Google Maps app for iPhone in 2x mode but that’s a bit of a hack to cover an inexcusable shortcoming in a crucial native app. Hopefully Apple is able to improve Maps data over time. (4) The wifi bug, which causes frequent timeouts and disconnects on wifi networks using WPA authentication. This was fixed in iOS 6.0.2.

Most of my problems have more to do with iOS6 than with the device itself, and those issues are being resolved even as I type.

I got a dark gray Smart Cover to go with the iPad mini. It’s simpler than the full-size Smart Cover, with fewer folds and a cloth layer covering the much stronger magnet. Not quite as sturdy when in a standing position but more than suitable for my needs. Later on I also got an “i-Blason” brand screen protector and soft back cover, and they’ve done quite well for protecting the iPad from everyday wear and impact. The screen protector came with some hilariously bad English on the packaging. 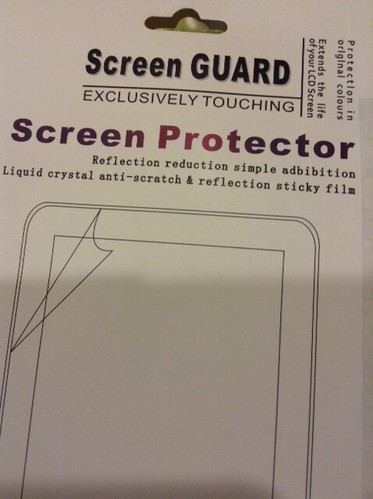 The iPad mini takes all the versatility and ease of use of the iPad 2 and compresses it into a far more portable package without losing the rich featureset of its larger brethren. They say a Retina iPad mini will come in the future but I’ve been fine with this. It types well (I wrote this entry on the mini), runs all the apps I need, displays books and movies legibly, and slips right into my slacks and jacket pockets with ease. It’s one of those things where I hold it and use it and think, “Ah, life in the future.” Full iPad mini unboxing photoset here. (Oh, and I named my iPad mini “Dungeness.” I had just eaten crabs the previous night.) I leave you with this parody ad.