It is with great sadness that I announce the passing of our cat Pandora, due to complications from advanced kidney failure. She was 21 years old. (April 1991 to November 2012.)

Pandora first came into my life while I was living in Baltimore. My housemate Patrick’s cat, she was one of a pair of siblings from a litter descended from a tabby and a white Persian. The brother, Jasper, was a tabby after their father, and Pandora a white Persian after their mother. She had one green and one blue eye, and was 11 years old at the time. A year later when I moved back to DC, Pandora joined me, while Jasper stayed in Baltimore. Patrick brought Pandora to my apartment in DC on a Sunday in October, with less than a day’s notice. I think she hid under the bed in panic for about 3 days before she came to terms with her new home. Then she settled in marvelously. As Serious Cat she even managed to cameo on the British Comedy “The IT Crowd” (Series 3 Episode 6), briefly appearing as a background printout pinned to a door. 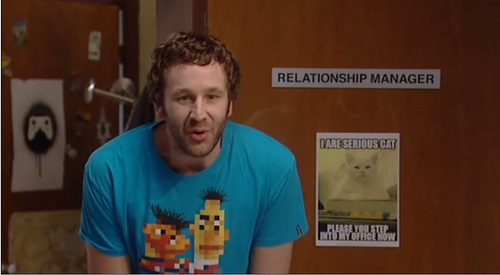 Pandora was later diagnosed with hyperthyroidism, and had lost about half her considerable weight to the disease before she started on medication. This proved to be something of a blessing in disguise, as the condition actually brought her down to about average weight from what had been an unhealthy state of obesity. Pandora would later develop kidney disease and hypertension, conditions common to older cats — and by this time she was quite old indeed. She lived her sunset years in relative comfort on the couch, with a regimen of daily pills and subcutaneous fluid injections. Pandora even discovered late in life that we have a balcony, and spent many hours enjoying the sun and breeze outside, which she had never experienced in Baltimore or DC. She rapidly declined in the last two months, suffering a seizure in September, and getting diagnosed with heart murmur and hypertension at the veterinary cardiologist. None of this was too surprising; she was an old cat, and her brother Jasper had just recently died. I knew the end was coming, though I did what I could to keep her living comfortably. Last week, Pandora crashed, hard, just before we left for Norfolk. We left her at the vet for intravenous fluids and medication, but her condition continued to worsen. She had progressed to Stage 4 renal failure and had lost over 90% of her kidney function. Severe anemia and low blood pressure followed, with her red blood cell count dropping to half of normal, even as her blood urea and creatinine levels peaked dangerously. By Sunday she had lost so much weight that the vertebrae of her spine formed lumps in her skin. She lost the use of her hind legs, and had stopped eating and drinking altogether. Her breath and fur stank as her toxin levels shot up, and anemia and dehydration made her weak and listless, barely able to even raise her head. I decided it was time to euthanize her, to avoid further suffering. Home euthanasia was the kindest solution, and our vet was nice enough to drive over with a tech to put Pandora to sleep. Once injected, Pandora went very quickly and quietly, falling asleep without a struggle, her heart stopping within seconds. We cried over her body for a bit, and I closed her eyes. The blue and the green were gone, and she was still. I said one more goodbye, wrapped Pandora in a fleece throw, and the vet took her away. I’ve donated her remains to veterinary science, so the doctors at the animal hospital can perform a necropsy and learn something about renal failure and its complications in older cats. It’s my hope that in death Pandora can provide some insight into helping other living cats enjoy similar longevity, even with old age diseases such as those she struggled with. I weep for her loss but I’m thankful she lived as long as she did; 21 years is a formidable and venerable age for any cat, and when it came time to go she faced it with courage and peace. Though she is gone, Pandora leaves us with many good memories — and over 700 pictures on Flickr. Goodbye, Pandora. You were a sweet, affectionate, beautiful cat and we’ll miss you dearly.