On November 26th, 2011 — the Saturday after Thanksgiving — NASA JPL’s Mars Science Laborotary, AKA “Curiosity,” lifted off on an Atlas V (541) rocket. It was a familiar sight — almost the same rocket configuration as we had watched launch at the Juno NASA Tweetup, minus one solid booster. (The difference was that Juno had launched on a 551 configuration. While MSL would reach Mars in 8 months, Juno wouldn’t arrive at Jupiter till 2016.)

Curiosity arrived at Mars on August 6th, 2012, its EDL (Entry, Descent and Landing) process consisting of multiple steps: heat-shielded reentry, supersonic parachute, powered rocket descent stage, and finally a skycrane to gently deliver the rover to the surface before the descent stage then departed to crash elsewhere. JPL showed a 3D simulation of EDL and the rover’s overall mission:

On landing night, I watched from home, rapt with awe, running the NASA EYES MSL simulation in one window and NASA TV feed in another. 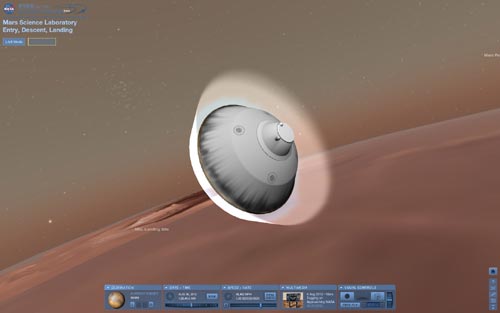 EDL went pretty much flawlessly, with much jubilation from Mission Control. The words to listen for were “Tango Delta Nominal.”

On the way down, the Mars Descent Imager captured about five frames per second, recording the rover’s downward view from heatshield separation till touchdown. Bard Canning’s heavily post-processed HD-interpolated MARDI video has gotten a lot of buzz, but my personal favorite is still Doug Ellison’s earlier MARDI sequence roughly synced to audio from JPL Mission Control.

The MARDI sequence even captured the rover’s ejected heat shield hitting the surface.

Meanwhile, Mars Reconnaisance Orbiter soared overhead, its HiRISE camera capturing amazing photos of the reentry stage descending by parachute, and later all the hardware that had crashed to the Martian ground around the rover itself. (See also MRO HiRISE’s past capture of the Phoenix Mars Lander.) 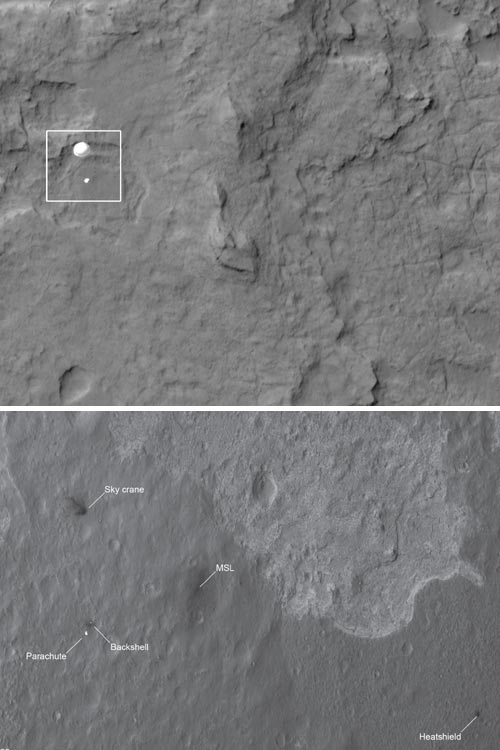 Within minutes of landing the first image had arrived from Curiosity’s Rear Hazcam: a B/W fisheye view of the Martian soil, with what may have been the smoke plume from the crashing descent stage. “It’s the wheel!” was the cry that pierced over the celebration at Mission Control. 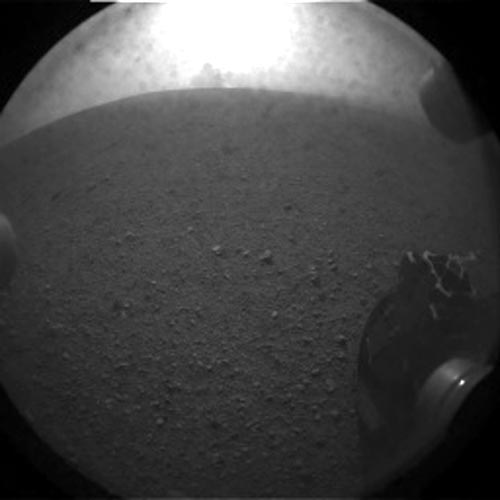 That was 48 days ago — or 47 Sols on Mars, where each day is about 40 minutes longer than on Earth. Mars rover engineers and scientists live on this adjusted schedule, coming in to work 40 minutes later every day. Lead flight director David Oh even lived on Mars Time with his whole family, and Curiosity rover driver Matt Heverly uses the Mars Clock app to keep track of when to go to work. 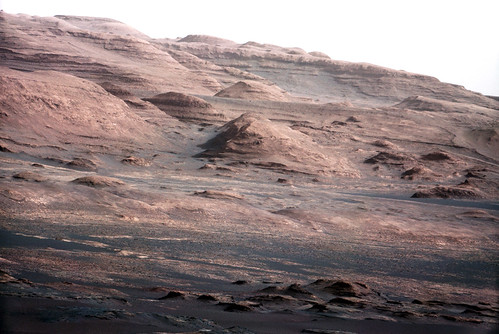 Since landing, Curiosity has stretched its turret and robot arm, tested its cameras, driven about 260 meters, and examined two rocks en route to its first primary scientific waypoint, Glenelg Intrigue. Powered by an MMRTG with a plutonium core, Curiosity is scheduled to run through its main science mission over about two earth years — though the MMRTG may last as much as double that, if not more.

It’s an awesome robotic planetary adventure I’ll be watching with great interest for however long it goes. Which reminds me, I should check back on MER Opportunity once in a while.