Single late afternoon dive since we arrived at the resort a bit late, at nearby Matu Point. Short for “Matutunggil,” the dive site sits by a large rock just off a corner of Balayan Bay amidst the densest strip of Anilao dive resorts. Rocky wall with boulders dotted with coral and attendant fish, anemones, and one very friendly sea turtle that joined us for a bit. Ascended into twilight, to be greeted by the sight of the moon and Venus close together in the sunset sky. 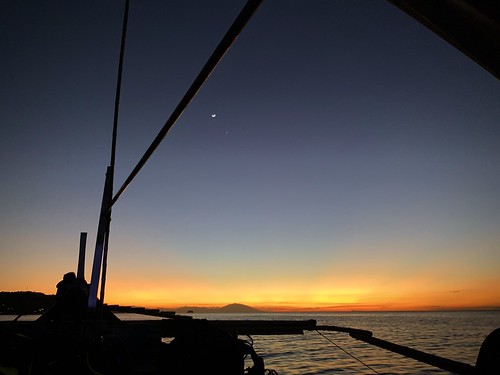 First dive of the day off Sombrero Island, south of Batangas Bay across Verde Island Passage, just an hour south of Anilao. Steep rock wall with lots of coral and fish. Found a small stingray in the sand that swam off as I approached. Also another sea turtle showed up, this one a bit less companionable than yesterday’s. Sad casualty of the day: my GoPro Hero4 Session, which I used at the surface for a bit and then threw back into the boat before descent, but it appears to have either missed or bounced back out into the water without anyone seeing it — hence the lack of underwater imagery from this dive trip. 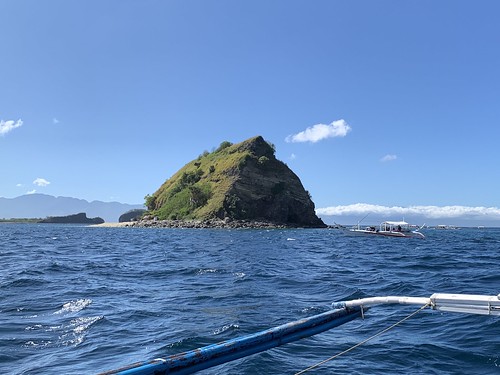 So named for the billowing sail-like hills of Caban Island, the dive site at Layag-Layag was also the site of my second-ever checkout dive back in 1990. (That dive did not go well as I was swept off the reef and up to the surface by a strong current and had to be rescued by divers on another boat.) This dive 30 years later (!) was much better, with little current as we hovered over a sloping sandy plain dotted by hundreds of garden eels, wispy and snakelike. Also spotted an interesting anemone, dark red with luminously bright tips, no clownfish in residence at the time. 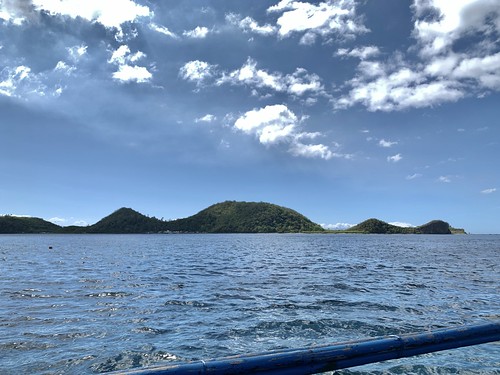 Dive resort and marine sanctuary north of Halo, up Balayan Bay. More garden eels on a sandy field at start of dive, followed by a sheer wall with small shelves covered with coral. Dove through a small cave in the reef, just big enough for diver and tank, stung hand on a bit of soft coral towards exit. Main attraction was the famed “school of jacks,” a formidable vortex of fish swirling out in the blue water. We had to dive out a bit from the reef to see it, led by the urgent gestures and tank-taps of divemasters, but it was well worth the sight. 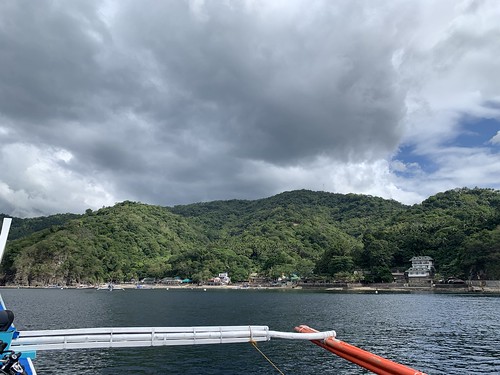 North of Dive & Trek and farther up Balayan Bay sits Ligpo Island, a private resort island just off the mainland. Pinnacle in shallows descends to vertical wall with coral-encrusted ledges. On one ledge was a picturesque little archway big enough for a single diver to go under. Buzzed multiple times by a pair of large trevallies at start of dive. Towards end, accosted by a single small remora that hung around to clean my fins for a minute. Inadvisably bounced below 100 ft to fruitlessly investigate a reef indentation, resulting in dive computer giving me an 11 minute decompression stop on ascent. 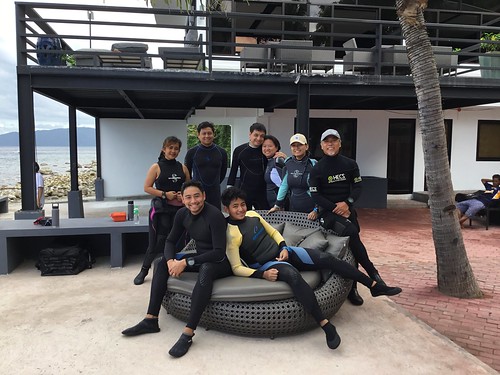 Last dive day of the year and for this trip. Many thanks to Divemaster Penn of Batangas Dive Association (BaDAss) for some great diving. More photos in the album for this Philippines trip.