Scary launch failure on Soyuz MS-10 as a booster anomaly led to an abort, with the crew of two returning to Earth via ballistic descent and landing safely in Kazakhstan. 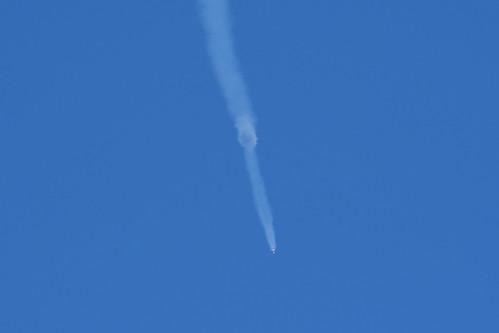 NASA ISS Expedition 57 photo album includes this photo taken around the time of the anomaly — note only 3 of 4 strap-on boosters can be seen separating from the core stage, consistent with the explanation that a separation motor valve failed on one strap-on, resulting in violent recontact with part of the launch stack.

While the launch failure is a frustrating event, it’s at least comforting that launch escape systems worked and kept the crew alive; there has been at least one past incident where the outcome was lethal. Sadly no trip to the ISS for NASA rookie astronaut Nick Hague.

Update: More on the incident, with Roscosmos onboard video of the anomaly, from Scott Manley.