It took a few tries but we finally got to Hersheypark, joining Amy’s dad for a day of roller coasters and other rides. The drive there was just two hours, but with the traffic we spent another hour just getting on to the exit ramp at Hershey, PA and crawling through multiple traffic bottlenecks to the parking lot. Once there, however, we were lucky enough to find an opportune spot close to the park which afforded a nice view of the school on Pat’s Hill. From there, it was a short walk past Chocolate World to the park entrance, where we met Amy’s dad and glided through the crowd into the park through the prepaid ticket entrance. We started by going deep into the park to get on rides that had shorter lines because the morning crowd hadn’t yet reached them.

Storm Runner — hydraulic-lauch coaster with 4.2G acceleration from 0-72mph in 2 seconds, 150 foot drop, and multiple inversions. My first accelerator coaster, really fast; the ride was over in less than a minute.

Wildcat — wood coaster named after Hersheypark’s original “Wild Cat” coaster from the 1920s (now gone). The new Wildcat was notorious for its painful roughness, over and above the usual for a wood roller coaster, until a recent retrofit. I found it no bumpier than other wood coasters I had ridden before, but did come away with a mild headache.

Lightning Racer — wood coaster with racing trains, Lightning and Thunder, on dual tracks. We rode twice, on each side, first in the rear, second in front. Lightning lost, Thunder won. The first drop was amazing, and the convoluted wood tracks evoke the art of Giger and Escher in an organic visual tangle.

Great Bear — inverted coaster by Bolliger & Mabillard, similar to BGW’s Alpengeist but with a shorter track and much faster ride. The rail actually does sound like a growling bear as the cars pass through.

SooperDooperLooper — steel coaster from 1978, another classic: the first looping roller coaster on the East Coast.

I shot all these roller coaster videos with a pair of You-Vision camera glasses, tightly strapped to my head.

Between coasters we also went on a few gentler rides. The Ferris Wheel afforded some lovely views of the park, and is itself a visual treat. The Monorail (heavily coated in advertising for a local health insurance provider) took us around the park, over ZooAmerica, and out of the park through downtown Hershey, past the old chocolate factory, which seemed to be undergoing demolition. Towards the end of the day we rode the Kissing Tower, a revolving elevator with Hershey Kisses-shaped windows. Our ride was timed just right to get a lovely view of Hershey at sunset. ZooAmerica focuses on North American wildlife, and sits right beside Hersheypark, accessible with the price of admission and a handstamp at the bridge. Along the suggested route we saw a variety of animals, many quite visible and active. An alligator came up to the window to look at me. In the Southwestern desert habitat a burrowing owl feasted on a mouse carcass while a roadrunner hung out with tortoises. The prairie dogs were especially fun to watch, as they got into comical little fights in twos and threes. I also got a picture of my father-in-law looking like he was amidst the prairie dogs. 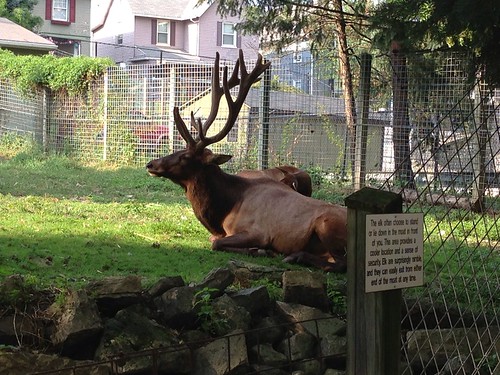 I’d skipped breakfast that morning in the rush to get to Hershey earlier, so we stopped at the first eatery we saw without a line near the entrance. This was a Famous Famiglia pizza. It was an unremarkable but satisfactory pizza breakfast.

For lunch we had sausages from Wurstburg Grill, eaten to the music of screams from riders on the nearby Fahrenheit coaster. For dinner after the Kissing Tower, we found one of the few air-conditioned and not-too-crowded eateries in the park, Gourmet Grille, which had a decent selection of burritos, salads, paninis, and other civilized fare. A very fun day, and one of those times I’m especially glad Amy and her dad got me into roller coasters. I can see why Hersheypark is a regional favorite, and I wish I’d thought to book a room and stay overnight so we could see the rest of Hershey, PA as well. There’s always next time.